Tibetan Mastiff is classified as a primitive breed and still exhibits characteristics and adaptations necessary for it to survive in the high altitude and severe cols in Tibet. They can ably fight mountain lions in the high mountains of Tibet because they are large, ferocious and intelligent. Marco Polo was the first Western traveler to have encountered Tibetan mastiffs. In 19th century England, King George owned a pair of this dogs.

Tibetan mastiffs are an ancient breed long revered as adept guard dogs. This particular Tibetan mastiff puppy is considered "a perfect specimen," and Lu estimates that the buyer could recoup his investment in the dog in just a few years by hiring it out to other breeders for as much as 100,000 yuan each. 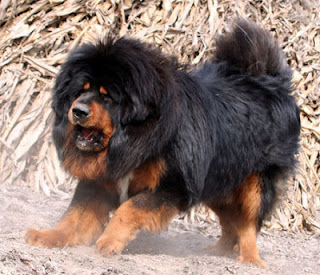 While Tibetan mastiffs have long been a cultural staple revered in Asia, they have increasingly taken on a more heightened role as a status symbol representing affluence in China.