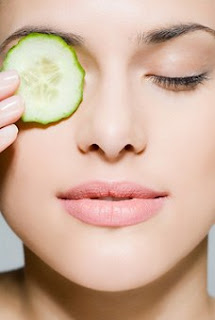 Allies against the dark circles and bags under the eyes are in your fridge. Check how you can help yourself and forever resolve or at least temporarily camouflage those boring shadows placed under your beautiful eyes.

1. Slices of fresh cucumber
One of the oldest recipes from grandma's advice notebooks is certainly the one to alleviate dark circles under the eyes using slices of fresh cucumber. Due to the cold slices of vegetables consisting 95 percent of water, blood vessels constrict and thus temporarily reduce puffiness under the eyes. This method is definitely the low cost and very simple, but equally fleeting.

2. Sleeping
Sleep relieves a variety of health ailments caused by stress lifestyle. It also has a positive effect on our complexion and thus the reduction of dark circles and bags under the eyes. Unfortunately it does not remove the dark circles. Some dermatologists recommend sleeping on two pillows to make a position of the head elevated to prevent water retention in the lower eyelids.

3. Meals customized to skin health
We often ignore that the skin is the largest organ on the body and it's affected by the choice of food for our daily menus. If they are nutritionally poor, it will recognize on your face. Therefore, instead of afternoon coffee, in a cup pour the green tea rich with antioxidants which acting anti-inflammatory. Salmon is rich in astaxanthin, carotenoids credited for the increased skin elasticity while avakodo and eggs are rich in biotin, and vitamin B7.

5. Eye mask
Except that it will reduce puffiness under the eyes, gel masks provide a mini-therapy 'forced' vacation of at least 15 minutes. Cold mask tears vessels under the eyes, but more importantly is relaxation speed that will make you to be calm and relax a while.

6. Cream under eyes
No other cosmetic product has not experienced such a boom in recent years as a cream for the area under the eyes. Although only one of the younger family members preparative cosmetics, today every woman at evening gently tapping one of these creams. Those that contain hydroquinone, an ingredient for skin fade achieve greater impact in alleviating dark circles, but because of their aggressiveness can cause an allergic reaction.

7. Nose drops
Apart from lack of sleep, the cause of dark circles can be a blocked nose. With spray or nose drops you can easily solve this problem, but only with medical advice to avoid too far with the use of drugs for no longer than it's necessary.

8. Antihistamines
These months many people are fighting with some allergies trying to reduce its symptoms such as stuffy nose, tears in his eyes and accompanying bags under the eyes. Antihistamines will be helped, but only with the advice and recommendation of your doctor.