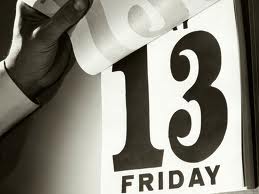 1. Number 13 is an important number for Jews. A boy becomes a full member of the Jewish faith, i.e., Bar Mitzvah, only after he turns 13!

2. Triskaidekaphobia is a morbid fear of the number 13. Isador Coriat, an American psychologist, was the first to use this term in his book â€“ Abnormal Psychology.

3. People who suffered from triskaidekaphobia include Napoleon, Christopher Columbus, and Winston Churchill. Winston Churchill, out of these, refused to sit in row number of 13 of a theatre or an aircraft.

4. Per few mythologists, 13 is a â€œfemale numberâ€, as a woman has a total of 13 menstrual cycles in a year. When Chinese women make offerings of moon cakes, there are 13 on the platter. It is a number implying blood, fertility, and lunar potency.

5. The American flag has 13 stripes in honor of its first 13 colonies.

6. A hangmanâ€™s noose traditionally has 13 knots.

7. The thirteenth trump card in a Tarot deck is the death card, showing a skeleton riding a horse, carrying a black flag.

8. Number 13 is considered to be lucky in Italy.

9. Some biblical traditions believe that Judas Iscariot was the 13th person to sit at the table during the Last Supper.

10. Americaâ€™s Colgate college considers 13 its lucky number, as it was founded in 1819 by 13 men with 13 dollars with 13 prayers. Collegeâ€™s address is 13 Oak Drive! Furthermore, the collegeâ€™s senior honor society is composed of 13 male and 13 female members. Even its satirical newspaper, The Daily Rag, has a slogan â€“ â€œWritten by 13 Writers with 13 Stories after 13 Beersâ€.