A baseball player’s dad forced him to hit lefty, and that helped him set a baseball record! Learn more 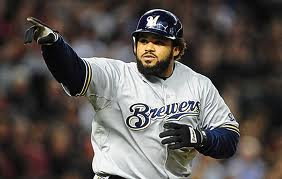 Prince Fielder was born in Ontario, California in 1983 and it was during that time that his father, Cecil, was in the minor leagues playing for the Toronto Blue Jays. Prince grew up at the baseball diamonds. Prince, his mother, and sibling were on the road following Cecil everywhere his career took him. Prince began playing baseball as soon as he could walk and he was a natural right handed hitter. When Prince was five, his dad forced him to start hitting left handed.
Cecil told Prince he’d thank him for it later. He was right. As Prince got older he became a strong hitter and batting lefty gave him an edge. Currently Prince Fielder plays for the Detroit Tigers number 28. He is a four time All-Star and he still throws right. His first seven years in the Major League Baseball team was with the Milwaukee Brewers. He is the league’s youngest player to hit 50 home runs in a season.
Email ThisBlogThis!Share to TwitterShare to FacebookShare to Pinterest
Newer Post Older Post Home