A painting by a chimp was passed off as modern art by a French artist. 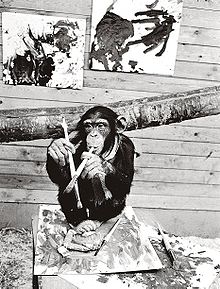 They say art, like beauty, is in the eye of the beholder. Some might even feel that a chimpanzee’s paintings are of the caliber of, say, French artist Pierre Brassau. Never heard of him? That’s because he’s not real! Let us explain. A Swedish journalist came up with the idea to display a series of paintings by renowned French artist Pierre Brassau. The catch was…there was no artist named Pierre Brassau. The paintings were all done by a chimp!
The journalist wanted to see if he could fool critics into thinking that the work was “modern avant-garde” masterpieces. It worked! One critic even said, “Brassau paints with powerful strokes, but also with clear determination. His brush strokes twist with furious fastidiousness. Pierre is an artist who performs with the delicacy of a ballet dancer.” When the hoax was revealed, the critic back-peddled and said he still thought the painting was the best in the exhibition. It was bought by a private collector for $90.
Email ThisBlogThis!Share to TwitterShare to FacebookShare to Pinterest
Newer Post Older Post Home