Birds are able to see a fourth primary color! 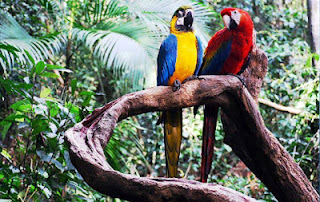 The best example of a tetrachromate is the bird, since most birds are tetrachromates. This means that birds distinguish a greater spectrum of colors than humans do. The zebra finch and columbidae are birds that rely on their tetrachromacy as integral parts of their lives. They use their vision to select a mate as well as find food. In a mate, they generally look for ultraviolet plumage.

Some researchers have hypothesized that some humans might be tetrachromates, and might just not realize it because they have no point of reference to compare their vision to. Women, in particular, are suspected of having this capability on a rare occasion because of their two X chromosomes. By having two X chromosomes, they could have extra cone cell pigments.
Email ThisBlogThis!Share to TwitterShare to FacebookShare to Pinterest
Newer Post Older Post Home