Horses about the size of a duck once roamed North America! 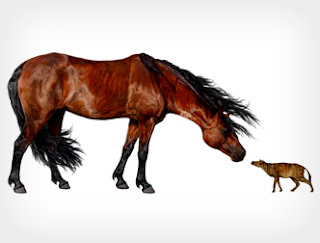 First off, let’s just get this out of the way – they were probably adorable. These duck sized horses initially weighed around 12 pounds, and lived in the forests of North America about 56 million years ago. It is known as the Sifrhippus However, scientists have come to realize something interesting about this animal. During a 175,000-year period known as Paleocene-Eocene Thermal Maximum, scientists know that the global temperature rose around 10 degrees Fahrenheit.
They also noticed that a third of mammals actually changed in size as a result! Thus, the Sifrhippus went from weighing about 12 pounds to weighing 8.5 pounds! When the warm period was over, the Sifrhippus grew rapidly and started to weigh around 15 pounds.
Email ThisBlogThis!Share to TwitterShare to FacebookShare to Pinterest
Newer Post Older Post Home