Jasper Newton "Jack" Daniel was a distiller and is famous for creating Jack Daniel's Tennessee Whiskey. The alcohol is so well known today that it is easy to forget that Jack Daniel was a real man. He was though. Daniel was born in Lynchburg, Tennessee in 1849 to Welsh and Scottish parents. He never married or had children, but instead devoted himself to his distillery that he opened in 1875. 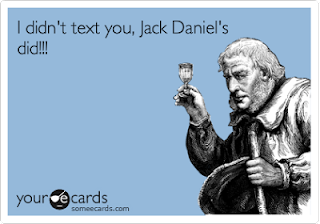 He took his favorite nephew, Lern Motlow, under his wing and taught him to do the books for business. In 1907, Daniel's health began to fail and he gave the distillery to Motlow. One morning, Daniel injured his toe after kicking his safe in anger (he couldn't remember the combination and couldn't open it). The infection spread and poisoned his blood. His last words were famously "one last drink, please." Looks like his distillery and Tennessee whiskey really were Daniel's passions right up until the end.
Email ThisBlogThis!Share to TwitterShare to FacebookShare to Pinterest
Newer Post Older Post Home