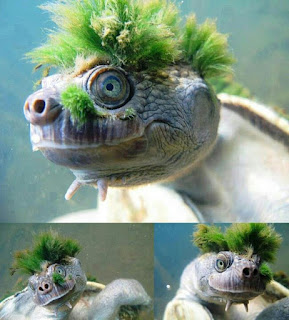 Mary River ~ The Rock N Roll Turtle
The Mary River turtle, Elusor macrurus, is
an endangered short-necked turtle that
inhabits the Mary River in South-East
Queensland, Australia.
In the 1960s and 1970s, they were popular
as pets in Australia, with about 15,000
sent to shops every year during a ten-year
period. They were originally known as the
"Penny Turtle" or "Pet Shop Turtle".
Hatchlings have a straight carapace length
of 2–3.5 cm. Their green mohawk are
made up of algae. This often covers the
shell as well as the head, and helps to
camouflage the animal.
Email ThisBlogThis!Share to TwitterShare to FacebookShare to Pinterest
Newer Post Older Post Home