Octopus wrestling was once a documented hobby 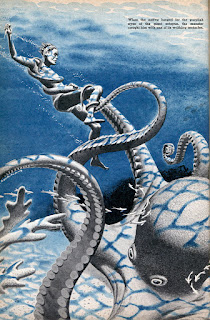 Generally in the open, an octopus is mild-mannered. If an octopus feels threatened or cornered, though, it can be pretty ferocious. They hunker down in caves and taverns along coral reefs and pose a danger to islanders. An old sport was hunting octopus’ and it was called octopus wrestling. In Tahiti and other islands, hunters arm themselves with 12 foot spears and go searching by the coral reeves for the creatures.
Some would use a flute to draw them out of the caverns, like a Hindu fakir charms a cobra. The music draws the octopus out by its curiosity for the sound. When an octopus is speared, sepia leaks from the wounds and makes the waters murky. The spears have rope tied to them, so the hunter doesn’t lose the octopus to the bottom of the sea and so they don’t lose their spears.
Before it dies, an octopus makes a loud human-like moan. The octopus is then dragged to shore and natives eat it with a sauce made from its sepia. It is quite the delicacy.
Email ThisBlogThis!Share to TwitterShare to FacebookShare to Pinterest
Newer Post Older Post Home