People in the 1990s had their mortgages financed thanks to Benjamin Franklin! How’s that possible? Learn here 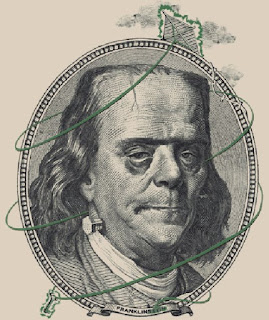 When Benjamin Franklin died, he bequeathed 1,000 pounds to Boston and 1,000 pounds to Philadelphia. Both monetary gifts were put in a trust to collect interest for 200 years. At that time 1,000 pounds was equivalent to about $112,000 today. The trust began in 1785 when the French mathematician Charles-Joseph Mathon de la Cour, who admired Franklin greatly, wrote a friendly parody of Franklin's "Poor Richard's Almanack" called "Fortunate Richard." The main character leaves a smallish amount of money in his will, five lots of 100 livres, to collect interest over one, two, three, four or five full centuries, with the resulting astronomical sums to be spent on impossibly elaborate utopian projects.
Franklin, who was 79 years old at the time, wrote thanking him for a great idea and telling him that he had decided to leave a bequest of 1,000 pounds each to his native Boston and his adopted Philadelphia. As of 1990, more than $2,000,000 had accumulated in Franklin's Philadelphia trust, which had loaned the money to local residents. From 1940 to 1990, the money was used mostly for mortgage loans. When the trust came due, Philadelphia decided to spend it on scholarships for local high school students.
Franklin's Boston trust fund accumulated almost $5,000,000 during that same time; at the end of its first 100 years a portion was allocated to help establish a trade school that became the Franklin Institute of Boston and the whole fund was later dedicated to supporting this institute.
Email ThisBlogThis!Share to TwitterShare to FacebookShare to Pinterest
Newer Post Older Post Home