some species of spider the female will devour the male after copulation. 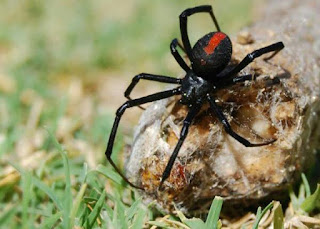 I'm sure most of you are aware that in
some species of spider the female will
devour the male after copulation. But did
you know that some males not
only do not fight against this
cannibalization, they actively promote and
facilitate it? The male Redback Spider
performs a somersault after mating and
literally jumps into the females mouth. But
why? What possible evolutionary benefit
could there be from enabling your mating
partner to eat you?
Researchers discovered that the
environment of these
spiders was so hostile that it was highly
unlikely that a male would be able to find
another mating partner. Therefore it would
be better for it to focus on ensuring that
the female did not mate again. Mate
guarding is a poor tactic for these spiders
as the females are so much larger.
The researchers also found that if a female
devoured her first mating partner she was
much less likely to accept a second male.
If she did not eat her first
partner she would usually accept to
solicitations of the next male that came
along.
These two factors (hostile environment and
female
choice when full) means that promoting
their own devouring actually confers an
evolutionary advantage on these male
spiders.
Email ThisBlogThis!Share to TwitterShare to FacebookShare to Pinterest
Newer Post Older Post Home