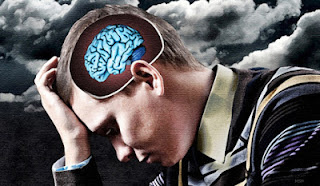 According to a new study published Aug. 12 in the journal Nature Medicine, people who are depressed may have smaller brains with less function of the nerve cells in the brain.

The Yale researchers analyzed donors' tissues from post-mortem
subjects and used previous imagery from individuals who were diagnosed with major depressive disorder (MDD) and found a lower brain volume with decreased neuron (nerve cells) functionality in the test samples. Nerve cells are responsible for communicating information through a process called synapses.
Initially, the researchers hypothesized that stress, along with depression, can contribute to both emotional and cognitive impairment in individuals.
The new findings suggest a single genetic switch in the prefrontal cortex of depressed subjects may be the culprit for the smaller brain mass.
Email ThisBlogThis!Share to TwitterShare to FacebookShare to Pinterest
Newer Post Older Post Home