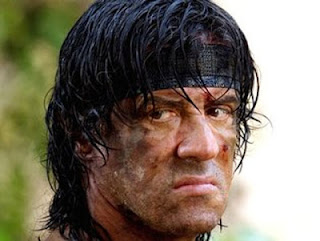 Sylvester Stallone is well known as an actor and especially as an action hero. Some of his most famous movies are Rocky and Rambo. In both, Stallone (whose full name is actually Michael Sylvester Gardenzio Stallone) plays the macho title characters, Rocky Balboa and John Rambo respectively. Stallone may be as famous for his distinctive voice as for his muscular physique. His diction is slightly slurred, slightly accented, and always intimidating.
Maybe you thought it was a side-effect of his intense weight-lifting routine or an act he put on to appear tougher. Neither are correct it turns out. Sylvester Stallone's slurred speech is actually caused by an accident during Stallone's birth. Due to complications, his mother's doctors were forced to use forceps to help deliver little Sylvester. The doctor accidentally severed one of Stallone's nerves in the process causing partial paralysis in the baby's face. The lower left side of his face remains paralyzed today. This includes parts of his lips, tongue and chin. And this is what causes Stallone's trademark snarl and distinctive voice.
Email ThisBlogThis!Share to TwitterShare to FacebookShare to Pinterest
Newer Post Older Post Home