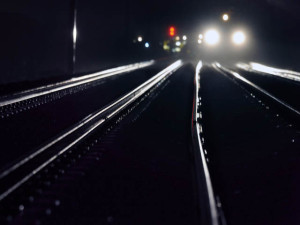 He was scary. He sat on the grass with… his cardboard sign, his dog (actually his dog was adorable) and tattoos running up and down both arms and even on his neck. His sign proclaimed him to be “stuck and hungry” and to please help.

I’m a sucker for anyone needing help. My husband both loves and hates this quality in me. It often makes him nervous, and I knew if he saw me right now, he’d be nervous. But he wasn’t with me right now.

I pulled the van over and in my rear-view mirror, contemplated this man, tattoos and all. He was youngish, maybe forty. He wore one of those bandannas tied over his head, biker/pirate style. Anyone could see he was dirty and had a scraggly beard. But if you looked closer, you could see that he had neatly tucked in the black T-shirt, and his things were in a small, tidy bundle. Nobody was stopping for him. I could see the other drivers take one look and immediately focus on something else – anything else.

It was so hot out. I could see in the man’s very blue eyes how dejected and tired and worn-out he felt. The sweat was trickling down his face. As I sat with the air-conditioning blowing, the scripture suddenly popped into my head. “Inasmuch as ye have done it unto one of the least of these, my brethren, so ye have done it unto me.”

I reached down into my purse and extracted a ten-dollar bill. My twelve-year old son, Nick knew right away what I was doing. “Can I take it to him, Mom?”

“Be careful, honey.” I warned and handed him the money. I watched in the mirror as he rushed over to the man, and with a shy smile, handed it to him. I saw the man, startled, stand up and take the money, putting it into his back pocket. “Good,” I thought to myself, “now he will at least have a hot meal tonight.” I felt satisfied, proud of myself. I had made a sacrifice and now I could go on with my errands.

When Nick got back into the car, he looked at me with sad, pleading eyes. “Mom, his dog looks so hot and the man is really nice.” I knew I had to do more.

“Go back and tell him to stay there, that we will be back in fifteen minutes,” I told Nick. He bounded out of the car and ran to tell the tattooed stranger. I could see the man was surprised, but nodded his agreement. From my car, my heart did a little flip-flop of excitement.

We then ran to the nearest store and bought our gifts carefully. “It can’t be too heavy,” I explained to the children. “He has to be able to carry it around with him.” We finally settled on our purchases. A bag of “Ol’ Roy” (I hoped it was good – it looked good enough for me to eat! How do they make dog food look that way?); a flavored chew-toy shaped like a bone; a water dish, bacon flavored snacks (for the dog); two bottles of water (one for the dog, one for Mr. Tattoos); and some people snacks for the man.

We rushed back to the spot where we had left him, and there he was, still waiting. And still nobody else was stopping for him. With hands shaking, I grabbed our bags and climbed out of the car, all four of my children following me, each carrying gifts. As we walked up to him, I had a fleeting moment of fear, hoping he wasn’t a serial killer.

I looked into his eyes and saw something that startled me and made me ashamed of my judgment. I saw tears. He was fighting like a little boy to hold back his tears. How long had it been since someone showed this man kindness? I told him I hoped it wasn’t too heavy for him to carry and showed him what we had brought. He stood there, like a child at Christmas, and I felt like my small contributions were so inadequate. When I took out the water dish, he snatched it out of my hands as if it were solid gold and told me he had had no way to give his dog water. He gingerly set it down, filled it with the bottled water we brought, and stood up to look directly into my eyes. His were so blue, so intense and my own filled with tears as he said “Ma’am, I don’t know what to say.” He then put both hands on his bandanna-clad head and just started to cry. This man, this “scary” man, was so gentle, so sweet, so humble.

I smiled through my tears and said “Don’t say anything.” Then I noticed the tattoo on his neck. It said “Mama tried.”

As we all piled into the van and drove away, he was on his knees, arms around his dog, kissing his nose and smiling. I waved cheerfully and then fully broke down in tears.

I have so much. My worries seem so trivial and petty now. I have a home, a loving husband, four beautiful children. I have a bed. I wondered where he would sleep tonight.

My step-daughter, Brandie turned to me and said in the sweetest little-girl voice, “I feel so good.”

Although it seemed as if we had helped him, the man with the tattoos gave us a gift that I will never forget. He taught that no matter what the outside looks like, inside each of us is a human being deserving of kindness, of compassion, of acceptance. He opened my heart.