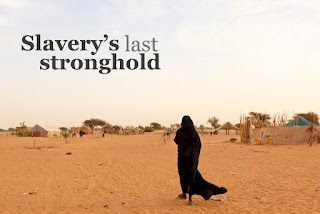 Thought slavery was abolished all around the world? Think again. A new CNN report has revealed that there are still slaves in the world today, in fact there is between 340,000 and 680,000, that is between 10-20% of the total population! These slaves are found in the very small Saharan nation, Mauritania. In 1981, Mauritania was the last country to abolish slavery.
Unfortunately, all activists in the country are arrested if they protest the practice of slavery, and the government denies that slavery exists within the country! Up until 2007, slavery wasn’t even a crime in Mauritania! Since then, only ONE slave owner has been arrested and penalized. Do these statistics seem a little fishy? You have to read the source to get the full story.
Email ThisBlogThis!Share to TwitterShare to FacebookShare to Pinterest
Newer Post Older Post Home