This is what six decades of love looks like 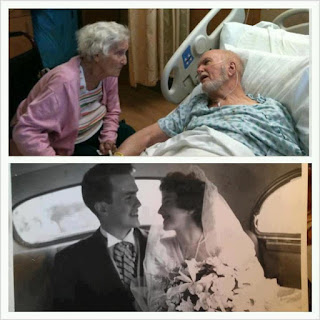 This is what six decades of love looks like.

James and Lauretta Burke were married 64 years. They met when James returned home from serving as an army officer in World War II. When a neighbor introduced him to Lauretta, he said he knew immediately that he wanted to make her his wife.

But she wasn’t ready yet. Lauretta insisted on finishing school at Mt. Mary College before getting married. So the Saturday after her graduation, they exchanged vows. They went on to have five children, twenty-three grandchildren, and a very happy life.

A few years ago, at the age of 87, Lauretta was diagnosed with Alzheimer’s. Shortly after, James had to have surgery to implant a pacemaker, which kept him in and out of the hospital for months.

“He was basically living for her,” the couple’s granddaughter said. “They were like the same person after being together for so long, and he didn’t want to give up because she knew that he needed him there.”

James used his last moments to amend his will so that his wife would have the best possible treatment for her Alzheimer’s when he passed on. On November 13, 2012, he passed away and left a legacy of love in his wake.
Email ThisBlogThis!Share to TwitterShare to FacebookShare to Pinterest
Newer Post Older Post Home