We take our feet for granted but scarcely give a thought to how best to keep them healthy.  Until of course, something goes wrong.

The human foot is one of the most complicated parts of the body, eachfoot has 332 joints, eight arches, 26 bones, more than a hundred muscles, ligaments, and tendons that all work in unison to allow movement.  Foot disorders must be diagnosed and treated early, as they often have the potential to become very painful and incapacitating.

There are three common foot problems that when treated early will save you from a lot of pain, and more importantly, form more complications..

Anybody who ever worn uncomfortable shoes has probably had footcorns and calluses problems.  Foot corns are  a result of too much pressure being applied on the foot's skin, such as when the bones of the feet press against tight shores and also press against each other. This foot condition is fairly easy to treat.  Doctors often prescribe wider shoes or cushion pads to relieve pressure.

Sometimes, the things you do to clean your toenails can do more harm than good.  Over clipping and digging deep into the sides can cause nails to throb, swell, and become infected and lead to a more seriousfoot problem called ingrown toenails. Podiatrists usually remove the nail spike and clean the area.  In the worst case, you may have to undergo simple surgery. 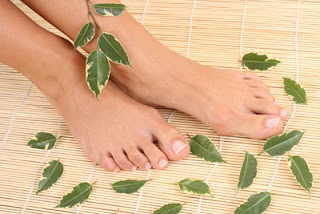 Fungi are attracted to warm and moist areas of the body such as thefeet – usually between sweaty toes.  The fungi latch onto the foot and cause itch and peel.  If untreated early, the fungi can even spread to the toenails and lead to what is called as Athlete's Foot.  There are many over-the-counter anti-fungal sprays, creams and powder available to treat this condition.
Email ThisBlogThis!Share to TwitterShare to FacebookShare to Pinterest
Newer Post Older Post Home