The Symptoms of Arthritis


Arthritis is often one of the unpleasant side effects that is associated with aging, but it can also effect younger people. Arthritis symptoms can vary depending on the type. Arthritis affects various body parts and can be caused by several different factors. The following is a discussion of some of the symptoms of different types of arthritis . 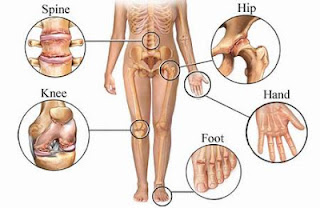 Ankylosing spondylitis is arthritis of the joints in the spine. It is also known as Marie-Strumpell disease and rheumatoid spondylitis. This disorder affects multiple organs including the eyes, heart, lungs, skin, and gastrointestinal tract. Symptoms of this arthritis include low back and hip pain, stiffness, difficulty expanding the chest, pain in the neck, shoulders, knees, and ankles, low grade fever, fatigue and weight loss. Initial arthritis symptoms are uncommon after the age of 30, although the patient might not be diagnosed until later.


Bursitis is a form of arthritis that usually affects the hip, shoulder and elbow. It can also affect the knee, heel, or base of the big toe. Bursitis often affects athletes, golfers, baseball players, and people who are out of shape or have poor posture. Bursitis causes pain and stiffness in the joint. The symptoms become worse when the joint is used. The joint may also be swollen and warm to the touch.


Juvenile arthritis symptoms are similar to adult symptoms. There is pain, swelling and joint stiffness. Symptoms can come and go. Young children might not complain about their arthritis symptoms so parents may not notice them until they see their child limping, avoiding physical activity, or acting unusually clumsy.


Osteoarthritis is the most common form in older people. It is brought on partly by long term everyday use of the affected body parts. Depending on which part of the body is affected, arthritis symptoms may vary. Most people with osteoarthritis in their fingers don’t even know about it unless an x-ray reveals deterioration in the cartilage. Arthritis symptoms are associated with pain and swelling. However, with osteoarthritis, the pain fades over time, even though the arthritis never goes away.


Gout is a form of arthritis where the body has too much uric acid. The symptoms of gout arthritis are intense pain in the joint (usually the big toe). It may also become red, swollen, and warm to the touch. At times, gout can occur in the wrists, ankles, and knees. Arthritis symptoms may not come back for several years, but if crystals formed by the uric acid are left untreated, it can destroy part of the bone.


Rheumatoid arthritis is caused by an overactive immune system. Arthritis symptoms usually start out as minor stiffness and pain. It may come and go, but eventually the arthritis systems get worse and more frequent. Treatment for this is most effective if caught within the first few months.


If you have arthritis symptoms, you should contact your doctor. Treatments are more effective if they are caught in the early stages.
Email ThisBlogThis!Share to TwitterShare to FacebookShare to Pinterest
Newer Post Older Post Home