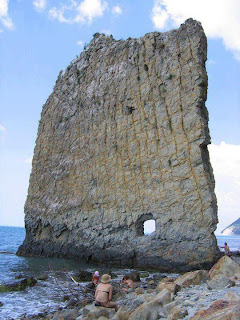 Sail Rock, or Parus Rock, is a natural sandstone monolith of late Cretaceous age located on the shore of the Black Sea, in Krasnodar Krai, Russia. It resembles the outline of a ship's sail, hence its name.

sail Rock has a sheer vertical slope confronting the shore of the sea, isolated from the mass of basic rock by geological forces. It is more than three-fourths revealed by the tide and lies perpendicular to the coast. What is most remarkable about this landmark is its proportions. While the cliff is only a little more than one meter thick, its height is about 25 m and its length about 20. Thus, the form of the cliff is described as resembling the outline of a quadrangular sail.
Email ThisBlogThis!Share to TwitterShare to FacebookShare to Pinterest
Newer Post Older Post Home